To commemorate the tenth anniversary of the devastating act of violence that permanently altered our college community, Inspire Solutions has launched a new project that focuses directly on our culture’s widespread normalization of violence. Our goal is to mobilize the Dawson Community into building an educational culture of resistance that breaks the silences and subverts the messages that support violence in its many forms. 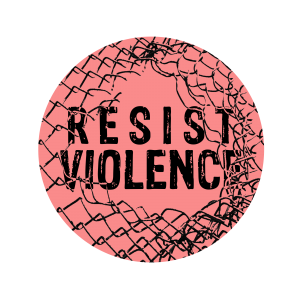 Concrete walls and barbed wire fences surround us, dividing us with the desire to keep “us” safe and “them” out. Some of our walls are not material realities, but they remain all too real – built on ideologies of hatred and fear or the denial of the suffering of others. Our logo draws attention to the need to breach these walls, while suggesting that they offer us only illusions of safety. From China’s Great Wall to the Berlin Wall, seemingly impenetrable walls inevitably fall. The effects of war, environmental devastation, and global inequality do not stop at borders, but neither do peacemakers and nonviolent people power.

Our project, Resist Violence, is about breaching walls of division, hatred and fear, and drawing attention to the potential of nonviolence to bring positive change. Nonviolence is a subtle form of power, sometimes visible in the forms of mass demonstrations and strikes, but often far less obvious in the actions of individuals who refuse to accept the lies and silences that divide us, and who resist in a multitude of ways that remain invisible until they become a movement for change.

We capture this in the choice of pink, a subtle color, one not viewed as symbolizing power and long connected to femininity. Nonviolence shares similar connections, but it is ultimately a force more powerful than violence. This is in large part as each and every one of us can join a nonviolent movement for change and find ways to resist violence, through the political views and causes we embrace, the purchases we make, the entertainment we consume, the food we eat, the toys we buy for our children, to name just a few. The goal of this project is to remind us that all of these actions have power and can change the world.

Our project was created in Fall 2016 with the participation of Dawson students in an inaugural course, Imaging Violence and Nonviolence, which pairs together a Humanities course and a Cinema-Communications course. While teacher and Inspire Solutions founding editor Pat Romano has been examining the widespread acceptance of violence in our culture and the potential of nonviolence in the Humanities course, filmmaker and Cin-Com teacher, Kim Simard, has been leading our students in the creation of media projects that resist violence. In #violenceseen, we present some of the photos taken by our students of the violence — both real and virtual — that permeates their daily lives, while their diverse projects can now be found on the project archive in Resist 2016.

Do you have questions about the potential of nonviolence? We invite you to look at these resources: