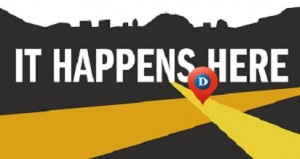 Sexual assault happens
but so can awareness, support and change

With It Happens Here, Inspire Solutions and Women’s/Gender Studies seek to engage the whole Dawson community on an issue that seems too often silenced in a unique, multi-faceted project designed to promote awareness, provide support, and create change. We are asking students and staff who have been sexually assaulted to speak up by anonymously making their mark on our map and/or by sharing – anonymously if they wish – a fuller testimonial to what they have experienced through a poem, personal story, video, or visual art work. For those who have been harmed, bravely telling their story often begins a path towards healing; for others, including those who have (knowingly or unknowingly) perpetrated a sexual assault, listening to the stories of those impacted can be a powerful experience, provoking empathy and understanding of the effects of sexual violence. 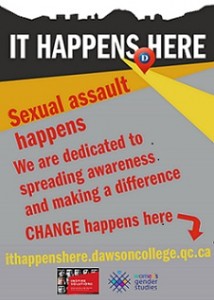 We launched our project on February 9, 2016 with a lecture by eminent University of Ottawa law professor, Joanne St. Lewis, who spoke about sexual violence and the law, from both a historical and contemporary perspective. This was followed in March by a series of workshops and talks, including one by student leader Anne-Marie Roy on her own personal experiences with rape culture at the University of Ottawa, during Dawson’s first-ever International Women’s Week. At the women’s/gender studies graduation ceremony in May, we unveiled our student-conceived Manifesto for Change, while this fall we hosted our first public reading event, Survivor Stories, where both survivors and volunteers shared their powerful words in an effort to end the silencing and shaming that surrounds sexual assault.

Make your mark. Share your story. Send us your solutions.

Go to the It Happens Here website at ithappenshere.dawsoncollege.qc.ca