By Inspire Solutions on October 18, 2017 in Articles

It is difficult to have faith in the potential of conflict-ridden societies to build sustainable peace. Not only do one half of peace agreements collapse quickly, but the global resources sustaining military actions far exceeds those for peacebuilding. In 2016, just over 0.5% of the $1.72 trillion spent globally on military expenditures went to finance peacebuilding. However, there is room for optimism, argues Phil Vernon, who has spent the past 13 years as the Director of Programming for International Alert, an international organization committed to supporting grassroots peacebuilding.

As director of programmes for International Alert over the past 13 years, I have seldom doubted the importance of our work, supporting local efforts to reduce violence and build peace in troubled parts of the world. When I was asked earlier this year to write a report making the economic, moral, and political case for more resources to be applied to peacebuilding, I thought it would be a simple task. After all, I have long been convinced of this case, so what could be simpler than articulating it to others?

But as I did my research, and began to frame the arguments, I started to have doubts. Violent conflict is on the rise. According to the Global Peace Index 2017 published last month, the last decade has seen the highest decline in world peace since the Cold War. The World Bank has also noted that two billion people live in ‘fragile states.’ That’s more than a fifth of the world’s population. By contrast, only one comprehensive, major peace agreement was signed in 2016, between the Colombian government and FARC rebels. This was an inspiring example of diplomacy, compromise and determination in action, but less than a year later, some commentators are already casting doubt on whether the deal has sufficient support in Colombia to survive.

One of the reasons international agencies spend less than 1% of the economic cost of war on building peace, is that their decision-makers are sceptical that peacebuilding really works – so they reach for more familiar tools for international engagement, or walk away from conflicts that remain unresolved. After all, I heard them say in my mind’s ear, achieving sustainable peace is a massive, well-nigh impossible goal, so why not settle for short term stability, however imperfect, and leave it at that. 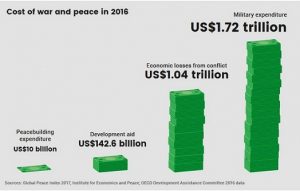 The problem with many peace deals is that they seldom if ever address the underlying causes of the conflict. In reality, every peace agreement is no more than a ceasefire, designed to stop the fighting for now. Important though such agreements are, what really matters is what happens afterwards.

After a lid has been put on the fighting, peace needs to be carefully nurtured and encouraged to evolve in subsequent years to deal with the issues that caused the conflict in the first place—such  as inequality, poverty and historical grievances—and  slowly building trust between the different sides. But the mechanisms and support required to do this are often lacking, especially on the most sensitive and hardest issues—the ‘higher hanging fruit.’

Peace deals also often result from external pressures rather than from a genuine coming together of opponents whose own analysis tells them that now is the time to seek a non-military solution. Such externally brokered peace deals can be particularly tenuous.

A big risk to peace also comes from third-party ‘spoilers’—leaders or parties who feel that the emerging peace threatens their interests or excludes them. Meanwhile, geopolitical factors such as changes in policy by major players like the USA can shift the circumstances and render the agreement no longer valid.

Current discussions around whether the Northern Ireland Peace Agreement will be undermined by Brexit or the recent UK general election is one example of how susceptible peace can be to apparently unconnected events. The peace that was brought by the 1998 Good Friday Agreement is now widely accepted, but as the Irish scholar Eunan O’Halpin has said, there are still unresolved tensions and bitterness.

Among countries where agreements did not hold is South Sudan, where dissatisfaction among elites over access to political and economic power led to the resurgence of rivalries and violence soon after the country’s independence in 2011.

And in Rwanda, spoilers played a part when some Hutu leaders rejected the Arusha Peace Accords in 1994, less than two years after signing, fearing that returning Tutsi rebels would have too much power, and contributing to the genocide that killed hundreds of thousands of people in less than three months.

Sadly, history shows that half of all peace agreements collapse very quickly, roughly within five years of signing. But my crisis of confidence did not last. I continued my research, spoke with others, and found the answer to their scepticism and my own nascent concerns. In cases where peace agreements fail, they largely ignore the underlying political and economic grievances that pre-dated it, resulting in renewed violence. This is why peace deals must, first and foremost, be won and sustained locally.

There are hundreds of good stories of successful peacebuilding initiatives out there, backed up by research and data. Well-documented stories of improved trust between warring groups in the Central African Republic, and between Hutus and Tutsis in Rwanda; improved political processes in Lebanon and Indonesia; and conflict resolution processes from the Philippines and Indonesia in the east, all the way to eastern Congo, to name just a few of these. And when one looks at the cumulative impact of these in a particular country, one can see that they generate a critical mass of energy for peace, and that if this continues, it leads to a constantly diminishing risk that violence will return.

This is what has been called “peace writ large” – a sustainably peaceful society, where people are able to resolve their differences and conflicts without violence. One can see it in Northern Ireland, or in Nepal, for example, where widespread, dispersed and locally led initiatives have been supported and enhanced by sustained, external support. That doesn’t mean we can ease off our call for more resources, but it does mean we can confidently call for more effort to be paid to peacebuilding around the world.

Our report, “Redressing the Balance: why we need more peacebuilding in an increasingly uncertain world”, published last month on International Peace Day (21 September), makes a convincing case for more support and resources to be applied to peacebuilding. Especially now, in a world where the number of conflicts and numbers of people killed or suffering is on the increase. From the experience of writing it, my confidence in the utility and effectiveness of peacebuilding was not only restored but strengthened, and led me to some key insights.

Whatever the sceptics say, there is clear evidence out there that peacebuilding initiatives work. The cumulative effect of many initiatives, operating at all levels, and locally-led but with international support, is to generate a critical mass of energy for peace, and has the potential to become self-sustaining.

But that doesn’t mean we can take our foot of the pedal. Because at least one third of peace processes break down, it is important to sustain peacebuilding efforts for a generation or more, moving from an initial focus on stabilisation to peacebuilding initiatives, purposefully aiming to embed peace writ large.

Evidences of success means we can confidently call on governments and international organisations to put peacebuilding at the heart of their policies and engagements, and to at least double the funds they allocate to this.

But this also means that we ourselves, as peacebuilders, need to be more confident in proclaiming success – in order to inspire others.

This article is a compilation of two articles, “Peace Writ Large” and “Sustaining Peace,” originally published on the openDemocracy 50.50 website. OpenDemocracy is a digital commons committed to promoting human rights, peacebuilding and reconciliation. We encourage you to take a look at this wonderful resource. All articles are published under Creative Commons licensing.