By Inspire Solutions on November 12, 2016 in Articles

Joshua Levkowitz addresses the potential of art to oppose violence and trigger further community resistance, as well as to help communities heal from war. While the results have been varied, the author discusses examples of public art from Afghanistan, Pakistan, and the Middle East that were presented at a recent forum organized by the United States Institute of Peace

Eyes gaze piercingly from a concrete blast wall outside Afghanistan’s intelligence headquarters. The group Artlords painted a series of such faces in Kabul to underscore that corruption is not hidden from the view of the people. Photo: Omaid Sharifi

One venue for public art amid violence is Afghanistan, which has been weighed down by war for nearly 40 years. Omaid Sharifi, who is 30, has never lived outside the country, and has watched the violence change his capital, Kabul. Ugly walls of concrete slabs, erected to protect government buildings and embassies, have grown up, gradually constricting the city’s streets into narrow canyons. Over a decade, the walls have risen in some places up to 20 feet high, and now block many more buildings.

The “walls make it feel like a prison, like there is no hope,” Afghanistan’s ambassador in Washington, Hamdullah Mohib, told the USIP forum.

Sharifi decided to use the blank concrete as a canvas to convert the “negative psychological impact of blast walls on the people of Kabul into a positive visual experience.” In 2015, he gathered artists and volunteers to form a group they called “Artlords”—appropriating a suffix that in Afghanistan is associated with warlords and drug lords. USIP has supported their work.

Artlords painted a series of murals showing the eyes of Afghans gazing out from the blast walls. One such mural, outside the national intelligence agency, carried a legend in Dari reading “Corruption is not hidden from God and the people’s gaze.”

The mural campaigns have prompted new interaction and dialogue among all types of Afghans—from generals and ministers to street kids— and opened space for critical thinking, Sharifi said at the USIP forum. Sharifi aims to plant seeds of doubt about Afghanistan’s status quo, encouraging Afghans to analyze everything, such as why people support warlords who have only brought them harm.

Beginning in September, Sharifi said, he plans a campaign against violent extremism because “radicalization is the biggest challenge in South Asia.” The new campaign will ask “Who are you killing?,” with murals showing faces of people who have died in extremist violence.

At the July 28 USIP forum, Samantha Robison, founder of a group of artists and activists known as Awareness & Prevention Through Art (aptART), discussed how her organization implements public art projects in the Middle East. The group coordinates workshops of youth from communities that have been marginalized or have suffered from violent conflict, holding discussions on their experiences and then working to create public murals. “For communities in either conflict or post-conflict environments, art can be part of the recovery process,” Robison said.

Robison’s organization held a workshop in Mafraq, a desert town in northern Jordan just 15 miles from the border with Syria and its war. Mafraq has been flooded with Syrian refugees, nearly 80,000 of whom live outside of town in the Zaatri refugee camp. The aptART workshop focused on coexistence, gathering participants from Jordan and Syria to paint a mural about love and peace. After the first day’s work, someone defaced the project, scrawling the message “Syrians go home.”

Leaders from Mafraq and the Syrians then gathered to discuss the concerns of the town and the experiences of the refugees. The workshop participants then completed the mural (see below), which has remained intact two years later, Robison noted.

In recent years, USIP has supported a range of art projects to seek the social justice and promote the peaceful campaigns that can avert violent social conflict. A Pakistan-based group called Fearless Collective uses public art to oppose gender violence in Pakistani cities. Groups such as Search for Common Ground use music and dance at “peace festivals” in the east African nations of Burundi and Rwanda, and the neighboring Democratic Republic of Congo to oppose ethnic violence. And the New York-based Bond Street Theater has revived theatric arts in major Afghan cities to promote peaceful elections there. 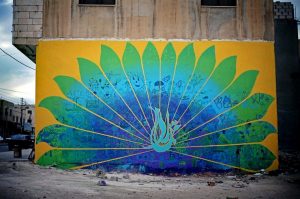 In the Jordanian town of Mafraq tensions have flared between local residents and Syrian refugees. Jordanian and Syrian youth used a workshops on conflict resolution to paint messages urging coexistence on the blank wall of a local building. The mural, in the form of a colorful peacock, was initially defaced, but dialogues between Jordanian and Syrian communities have helped it to stay intact. Photo: aptART

Still, in building peace, art is just a tool and has its limitations, said Nadia Naviwala, public policy fellow at the Woodrow Wilson Center who has been based for years in Pakistan. Naviwala has evaluated public art projects in the country and found that messages offered by peace activists’ art workshops are not always the ones received by the community, she told the USIP forum. Following one project in the slums of Karachi, “People were often confused or offended as to why elites were coming in and painting murals rather than doing something useful.” In such cases, she said, “The murals deteriorate and are forgotten quickly.” To be effective, the campaign’s objective must be in sync with the dynamics of the local community.

Public art can do very different things depending on the context. Artist and Harvard University professor Krzysztof Wodicko writes, “Since ancient times visual, sound, performance, and mixed-media artists have been major contributors to the culture of war: the massive presence in museums of military art and the participation of artists in war propaganda efforts and in designing symbolically and visually effective uniforms, armor and camouflage, as well as hundreds of thousands of artistically conceived war monuments, memorials and shrines that promote war as a way to make peace, or as a way of admiring killing and death as a noble duty and a sacred sacrifice.”Extremist groups have used art to mobilize people into militarism. Murals can crystallize a sense of victimization or propagate a desire for revenge. The founder of Al Qaeda, Osama Bin Laden, used poetry to create a sense of legitimacy around the group’s jihadist cause. In Afghanistan and Pakistan, various Taliban groups have used chants, songs and videos, distributed via the internet and cellphones, to glorify suicide attacks and increase recruitment. 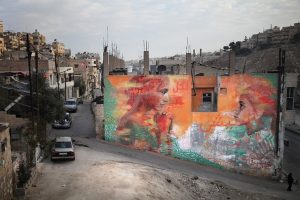 In Amman, Jordan, artist Jonathan Darby discussed with young men and women traditions that hold women back. They painted a mural in which a woman and a girl share their gaze. The image seeks to invoke the passing to new generations of courage to make change. Photo: aptART

Naviwala said she has found from her evaluation of public murals that painted “walls, alone, don’t change power.” Rather, change is achieved through the people who are gathered behind such projects. In times of conflict, artists are often the least deterred by insecurity. They feel empowered by their art and often are driven to continue at any cost. Their campaigns can stoke intangible elements for peacebuilding, firing the imagination and resolve of communities affected by conflict, or connecting islands of peaceful civic activism.

“We are awakening people’s consciousness,” Sharifi said of his group’s work in Kabul. “We encourage them to take responsibility. We empower them through involving them and giving them the confidence to stand up.”

Joshua Levkowitz is a program assistant on Afghanistan and Central Asia at the U.S. Institute of Peace.

This article is republished from The Olive Branch blog with permission from the U.S. Institute of Peace. See the original on the USIP website here.

4 Responses to Deploying Art Against War