By Inspire Solutions on November 12, 2016 in Articles, Links, Videos

Power and violence are opposites; where the one rules absolutely, the other is absent.

Of all the quotes that I have given my students to ponder, this one typically causes the most confusion. The idea of power and violence as opposites does not easily resonate. Consider one of the United States’ 10 active Nimitz-class aircraft carriers: “…in all the battle fleets of the world there is no ship even remotely comparable…weighing in at some ninety-seven thousand tons fully loaded, longer than three football fields, cruising at a speed above thirty knots, and powered by nuclear reactors that give it an essentially infinite radius of action” (Bacevitch 2013: 16). Upon seeing its looming presence on the horizon, non-Americans are like to experience fear, awe, anger, or some combination of these, at this immense display of US military might. But, for decades, concerns have raged both inside and outside of military circles about the vulnerability of this massively expensive concentration of military power, particularly to an aerial missile attack, and the enormous significance – strategic and psychological – of any successful sinking.

Indeed, much about military power rests on illusion. While militaries ostensibly exist to defend a population from enemy attack, military strategists admit that the capacity to defend is very limited, and for the most part the military’s power to protect is rooted in the capacity to inflict similar or greater punishment on the opposing side. Somewhat more noticeable are the enormous costs of war and militarism – the human lives sacrificed, the financial resources consumed and the devastating effects on our natural world, but the suggestion that nonviolent methods provide a real alternative to violence, particularly when facing an armed opponent, seems to defy logic.

In one of the most radical and influential nonviolent peace campaigns, the courageous women of Greenham Common regularly sought to illustrate the illusive nature of military security. In their protest against the stationing of US nuclear missiles on British soil in the early 1980s, the women regularly found creative ways to breach the military base, demonstrating time after time the absurdity of a nuclear weapons base’s inability to prevent unarmed women from breaking through its fences, and in one dramatic action on the anniversary of the Nagasaki bombing, they put the naked, ash-covered female body into play to shut down the base’s activity for a day (Jones 1987: 201). The symbolism was powerful: an image of almost complete vulnerability overwhelming the seemingly omnipotent power of militarized authority. 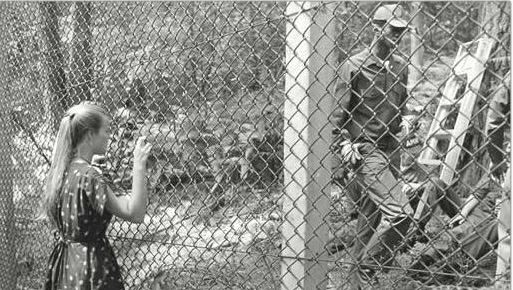 Many nonviolent tactics indeed involve performance, with the activists striving to demonstrate that real power lies not with those who control the weapons, but with those who refuse to obey. Significantly, militarized responses are also involved in performance, hoping that their displays of military weaponry will create fear and deter opponents; indeed, it is the hope that the threat will suffice that underscores our frequently expressed conviction that war preparations provide us with peace and security. And, while many military strategists admit that occasional resorts to force are needed to ensure a nation’s credibility, fundamentally, when governments use their instruments of destruction against either domestic opponents or foreign enemies, and in so doing unleash actions that are devastating and unpredictable in their consequences, the performance has failed. This is the meaning behind Arendt’s quote: the use of military power is a sign of a regime’s weakness, not strength.

Significantly, research on nonviolent movements highlight something more: governments seem to prefer confronting violent opponents than dedicated nonviolent ones. In interviews after WWII with renowned military strategist Sir Liddell Hart, German generals expressed how nonviolent resistance baffled them and how it was a relief when resistance became violent (quoted in Sharp 1973: 586). Indeed, there are many examples of governments seeking to infiltrate nonviolent movements in order to push activists towards violence, thereby providing the justification for a brutal crackdown. For nonviolent strategist Gene Sharp, the regime’s use of violence against nonviolent activists is a key turning point: if the protestors respond with violence, failure is usually inevitable as they cannot compete with the destructive power of the state; but if the activists continue to resist nonviolently, the political costs of violent repression typically increase, potentially threatening the stability of the regime itself (583-586). As Robert Holmes notes, “beyond a certain point increments in the capacity for violence cease to yield increase in power. Beyond that point, in fact, one’s power may decrease, however much destructive force one commands” (2012: 235).

This of course brings us to the inevitable question that is raised when the potential of nonviolent resistance is under discussion. As Holmes puts it: “They want to know how you would stop an enemy tank by going limp or melt the heart of a Hitler by turning the other cheek. Fair enough questions. At least as fair as asking them how you defend yourself against a twenty-megaton nuclear bomb about to explode overhead” (2012: 235).

There seems to be renewed scholarly interest in nonviolent resistance, hopefully a sign that our collective faith in violence is beginning to wane. In one recent book, Why Civil Resistance Works: The Strategic Logic of Nonviolent Conflict, Erika Chenoweth and Maria Stephen compared the effectiveness of violent and nonviolent resistance campaigns, and the results stunned at least one of the authors (see the Ted Talk below). Among 323 major violent insurgencies and nonviolent mass movements that occurred from 1900 to 2006, nonviolent campaigns proved to be twice as effective as violent insurgencies, succeeding more than 55 percent of the time. The average nonviolent campaign also appealed to a broader section of society, involving more than four times as many active participants, and resulted in far fewer human costs and more democratic outcomes.

In this first collection of articles on nonviolent resistance, we offer much to consider. We begin with a discussion of Nelson Mandela’s leadership of the black majority’s opposition to South Africa’s system of apartheid, and its transition from an armed struggle to a mass nonviolent movement. Several articles then go deeper into examining the potential of nonviolent resistance, and the factors that promote success. The collection, though, does not ignore the difficult realities. Cynthia Cockburn addresses the pacifist dilemma – what to do when you face a brutal opponent; this topic is then continued in Bartowski and Kahf’s discuss of the forgotten successes of Syrian’s nonviolent resistance against the Assad regime and Maria Stephen’s strategic analysis of how to defeat ISIS without violence. We then end with an inspiring look at the way that public art is being used to resist war in Afghanistan, Pakistan and the Middle East and a provocative suggestion of using nonviolence to resist armed invasion. Our intention here is to inspire and provoke a new look at the grossly underestimated potential of nonviolent methods of resistance – something that our world so desperately needs.

To watch some wonderful videos that document Greenham Common’s resistance to nuclear weapons, click on the above picture.

Watch Erika Chenoweth discussing her stunning results confirming the greater effectiveness of nonviolent methods of resistance in her Ted Talk.

Mandela’s Utilitarianism and the Struggle for Liberation
Reclaiming Nonviolent History

One Response to An Introduction to Our Topic: Resistance